As the European Commission sits down to discuss proposals for a new 2030 emissions target in time for the State of the Union address tomorrow (Wednesday Sept 16), more than 150 European businesses, investors and business networks, including Microsoft, IKEA, Deutsche Bank, Unilever, H&M, Google, EDF, Signify and Apple are calling on EU leaders to back the ambition set out in the European Green Deal and reduce greenhouse gas emissions by at least 55 per cent by 2030. 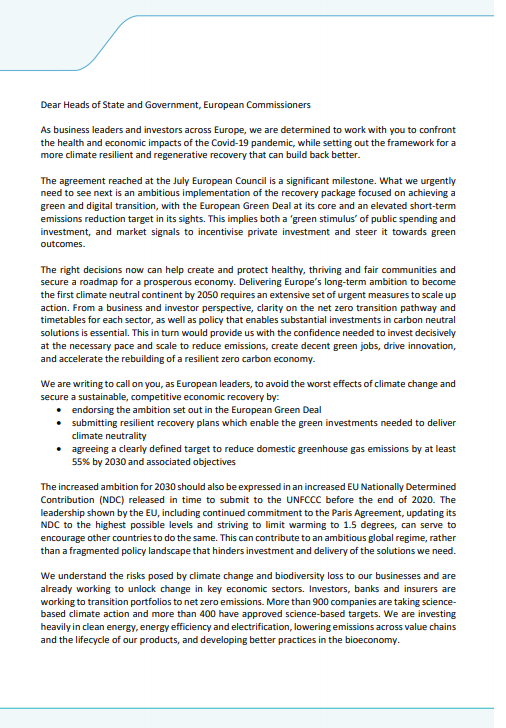 In an open letter, CEOs from across Europe and the economy have outlined their determination to work with the EU to tackle impacts of the Coronavirus pandemic while delivering a more climate-resilient and regenerative recovery. The letter indicates the diversity of European business support for increased climate ambition, with companies from sectors including, manufacturing, heavy industry, finance, consumer goods, power generation and technology supporting the 55 per cent target.

Signed by 157 businesses and investors, and 21 business networks, the letter states: “What we urgently need to see next is an ambitious implementation of the recovery package focussed on achieving a green and digital transition, with the European Green Deal at its core and an elevated short-term emissions reduction target in its sights.

“The right decisions now can help create and protect healthy, thriving and fair communities and secure a roadmap for a prosperous economy. From a business and investor perspective, clarity on the net zero transition pathway and timetables for each sector, as well as policy that enables substantial investments in carbon neutral solutions is essential. This in turn would provide us with the confidence needed to invest decisively at the necessary pace and scale to reduce emissions, create decent green jobs, drive innovation, and accelerate the rebuilding of a resilient zero carbon economy.”

The initiative is led by the European Corporate Leaders Group (CLG Europe), a cross-sectoral group of European businesses working towards delivering climate neutrality.

It was delivered in partnership with Business Ambition for 1.5C , the We Mean Business coalition which includes BSR, The B Team, CDP,  CLG Europe, Ceres, WBCSD, The Climate Group and its RE100 & EV100 networks, as well as with the Institutional Investors Group on Climate Change (IIGCC). There was additional support from European business and investment networks including BCSD Portugal, the Centre of Energy Efficiency Solutions (Slovenia), the European Alliance for Green Recovery, EU-ASE, EURIMA, EIIF, EHPA, The Aldersgate Group (UK), The Haga Initiative (Sweden), Skift Business Climate Leaders, the Solar Impulse Foundation, The Spanish Green Growth Group (Spain) and Wind Europe.

Together, ahead of Commission President Ursula von der Leyen’s State of the Union 2020 speech, and in the run up to Climate Week in New York, the signatories are urging European leaders to avoid the worst effects of climate change and secure a sustainable, competitive economic recovery by:

Christian Sewing, CEO, Deutsche Bank AG said: “Banks play a crucial role in this ambitious transformation. We can and must help companies to do business more sustainably. But we need the EU to pave the way by providing common standards.”

Casper Klynge, Vice President European Government Affairs, Microsoft said: “As we work together to achieve a green recovery from COVID-19, we have an unprecedented opportunity to act on climate change and gain momentum on our path towards carbon neutrality in Europe. Setting clear and ambitious targets is necessary to reach net zero. All of us – businesses and governments – can take actions that are good for growth, jobs and the economy, as well as for the planet.”

Helena Helmersson, CEO H&M Group: “We are committed to take responsibility to reach our climate positive ambition and contribute to ambitious global emission reduction targets. We need to take responsibility of our future together, and now companies and governments have to collaborate closer than ever before. Transparency and circularity must be the core of the leadership we need in the transition to a fossil free economy.”

Jesper Brodin, CEO, Ingka Group / IKEA Retail said: “The time for talk is over. We need to act, and we need to act now to accelerate climate action and limit global warming to below 1.5°C. IKEA is committed to become climate positive by 2030 and we ask governments to do the same. Stepping up their ambition and increasing the EU’s GHG emission reduction target for 2030 is essential in order to ensure a future that is climate neutral.”

Lisa Jackson, Vice President of Environment, Policy and Social Initiatives, Apple: “The choice between a healthy planet and good business strategy has always been a false one, and we’ve proved that with a company that runs on 100 per cent clean energy and a supply chain transitioning to do the same. As Apple works towards 100 per cent carbon neutral products and a carbon neutral supply chain by 2030, we’ll continue to call for the strong global targets we need to reduce greenhouse gas emissions and protect this planet for future generations.”

Jean-Bernard Levy, Chairman and CEO, EDF said: “I support a 2030 ambition for Europe of at least 55 per cent reduction in CO2 emissions. A cost-effective electrification of the European economy, furthering the use of low carbon electricity and innovative solutions in transport, housing and industrial processes, is not only what is right for the climate, but is also a matter of industrial policy and energy security. EDF’s electricity production in Europe is already more than 90 per cent low-carbon today and EDF will continue to be a key player of this breakthrough in the next decade.”

Eric Rondolat, CEO & Chairman, Signify said: “We can’t afford not to take bold climate action – it’s needed and it’s needed now. Consider this: if we achieve an increase in 3 per cent energy efficiency a year, driven by a similar 3 per cent in renovation rates, and 3 per cent increase in the use of renewables per year, then a carbon neutral world by 2050 is in reach. Crucially this requires an interim target of at least 55 per cent GHG reduction in 2030, which also equally distributes the workload between the current and the future generation who have to make this a reality.”

Matt Brittin, President, EMEA Business & Operations, Google said: “We’re proud to support the EC’s ambitious goal to make Europe the world’s first carbon-neutral continent. At Google, our goal is to run our global operations on carbon-free energy 24/7 and we aim to get there by 2030.  We’re also committed to playing our part by supporting strong policy action and helping others take climate action with technology and tools for a carbon free future.”

Eliot Whittington, Director, CLG Europe said: “European businesses and investors know that the only viable economic future that can deliver prosperity and wellbeing is one that stabilises the climate. They are standing up and standing together to call on the EU to ensure its near-term emissions targets get the continent on track to reduce the worst impacts of climate change and deliver net zero by 2050. We must learn from the pandemic that putting in place resilient and socially just economic systems is vital and that building back better must be at the core of the EU’s recovery package.”

María Mendiluce, CEO, We Mean Business coalition said: “Leading companies believe that it is crucial for the EU to reduce its emissions by at least 55 per cent by 2030 and to be net-zero by 2050. Ambitious climate policies give businesses the clarity and confidence they need to accelerate their investments and transition to the zero-carbon economy. An ambitious climate target will create jobs and drive economic growth.”

The letter will be highlighted in a high level virtual event organised by the UN’s Race to Zero on the opening day of New York Climate Week on September 21. The Race to Zero campaign — the largest alliance ever committed to net zero — aims to build momentum around the shift to a decarbonised economy ahead of COP26, where governments must strengthen their contributions to the Paris Agreement.

French MEP and chairman of the European Parliament’s environment committee Pascal Canfin came out in support of the letter.

In a tweet he said: “I strongly support this initiative. Following the launch of the European Green Recovery alliance, a significant number of business CEOs once again demonstrate that the fight against climate change is a key priority. It is essential that businesses back the need to raise our ambition to make sure that we deliver during the next decades for Europe to become the first climate neutral continent.”

Nigel Topping, High Level Climate Champion for the United Kingdom said: “Today’s letter demonstrates that EU businesses are serious about working together with the EU to support a race to zero emissions over the next decade. These businesses are already transforming their operations, but clarity on the pathway for each sector will provide the confidence needed to invest decisively at the necessary pace and scale to reduce emissions, create decent green jobs, drive innovation, and accelerate the rebuilding of a resilient zero carbon economy.”