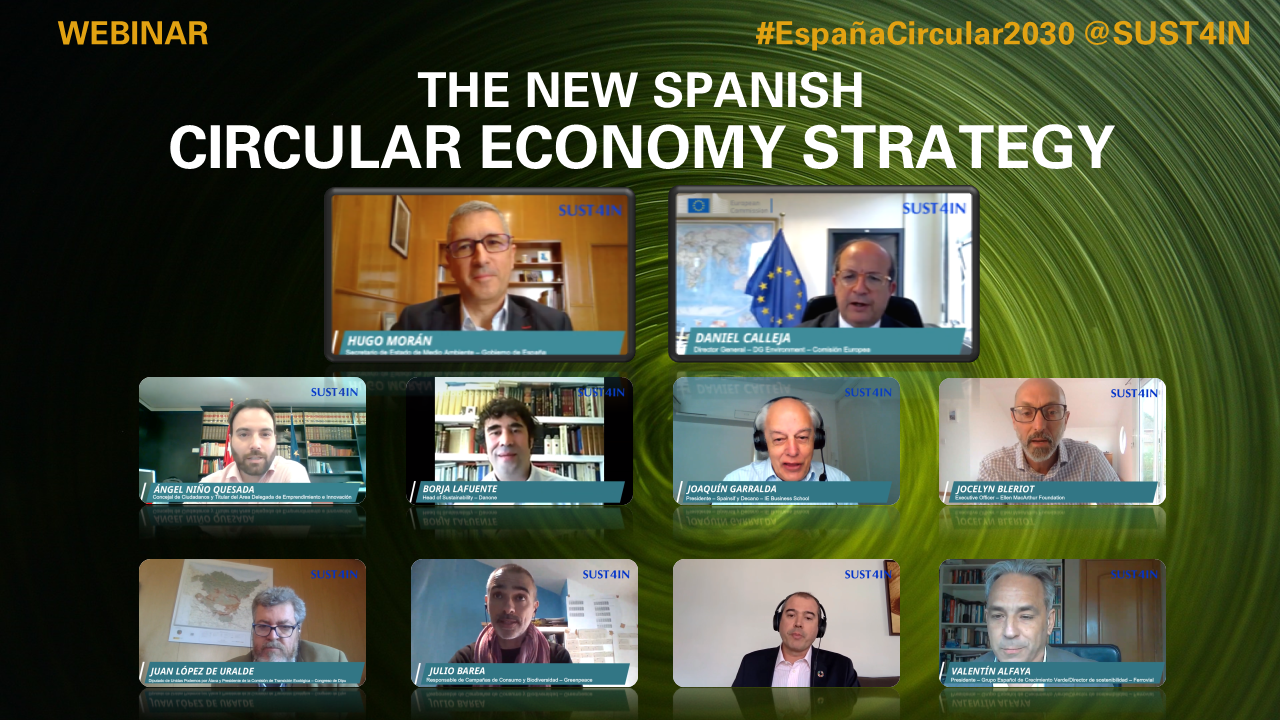 Madrid, June 15, 2020. The sustainability specialist company SUST4IN has organized a massive online event to discuss the responsibilities, challenges and opportunities of the new Spanish Circular Economy Strategy, approved by the Council of Ministers on 2 June, in addition to the Draft Law on Waste and Contaminated Soils, approved the same day and which is in the public information phase. The event was attended by hundreds of people, from 24 countries, from Tierra del Fuego to Oslo.

The founder and director of SUST4IN, Marcio Viegas, along with Ángel Niño Quesada, Councilor (Ciudadanos party) and Head of the Delegated Area of ​​Entrepreneurship and Innovation at the Madrid City Council welcomed the attendees.

Hugo Morán, Secretary of State for Environment of the Government of Spain, has been one of the main speakers, in whose speech he has commented: “Within the great global change in which we are immersed, the universe of the circular economy appears. It is true that we tend to simplify this universe and many times we leave it reduced to the world of waste, but in reality  it goes much further. When we talk about circular economy we are talking about an authentic and profound cultural change, which affects the revision of our production and consumption patterns.”

The next speaker was Juan López de Uralde, a Member of the Spanish Parliament (Unidas Podemos party) for Álava and President of the Ecological Transition Commission in the Spanish Parliament, who pointed out: “In nature there is no waste: everything that is left over in one phase is raw material for another. The human industrial cycle must imitate nature, so our objective must be zero waste, that way nothing is left out of the cycle. That is what the circular economy consists of. “

This was followed by a round table comprised by Valentín Alfaya, President of the Spanish Group for Green Growth and Director of Sustainability at Ferrovial, Julio Barea, Head of Consumption and Biodiversity Campaigns at Greenpeace, Joaquín Garralda, President of Spainsif and Dean of IE Business School, and Borja Lafuente, Head of Sustainability of Danone, moderated by Viegas, in which each one has given his opinion on the New Circular Economy Strategy and assessed the challenges and opportunities that the Draft Law of Waste and Contaminated Soils. One of the consensuses has been that taxation should play a greater role in the Strategy and in the future Waste Law.

Jocelyn Blériot, Executive Officer of the Ellen MacArthur Foundation, speaking from London, has congratulated Spain for its new circular economy strategy at the same time that it has also emphasized the importance of having an intelligent fiscal policy.

The webinar on media:

Daniel Calleja, Director-General of Environment at the European Commission, has been the other main speaker, who, from Brussels, introduced the European perspective and has pointed out: “The transition towards a Circular Economy will be one of the keys to recovery: A more circular economy will generate more industry, reduce emissions and our external dependence, and create hundreds of thousands of jobs. The Spanish Circular Economy Strategy is in line with the European strategy and has all the necessary elements to ensure the acceleration of the transition. From the European Commission we support its implementation”.

To conclude, Viegas reiterated: “Recycling is fine, but it is not enough. Reusing is even better, but it is not enough either. We have to act from the design, of products and public policies, and consume better. The circular economy is not a trend, it is a necessity. And a huge opportunity for everyone.” 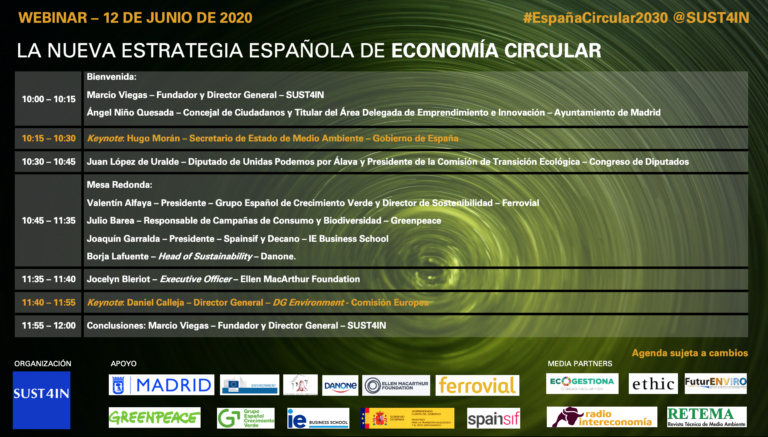